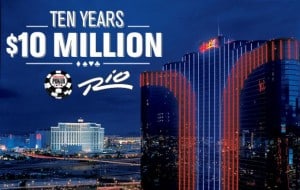 Ultimate Poker was at one time the only choice for legal Las Vegas-based Internet poker in Nevada. But ever since the globally recognized World Series of Poker brand launched its virtual poker operations, that company has held a lead over UP in both revenue and volume. As predicted, the annual poker spectacle that is the physical World Series of Poker tournament schedule held in Las Vegas every year has aggressively extended the lead the WSOP site holds over Ultimate Poker in cyber traffic. While the anticipated Texas Hold ‘Em main event is still well off in the future, after a week into the WSOP series, the World Series of Poker website has seen its traffic increase by nearly 50%.

On a typical day before the tournament series began, WSOP was visited by approximately 97 cash game players. Currently, seen as a direct result of advertising and online/off-line integration, the WSOP site is receiving about 148 cash game players in any 24-hour period. A record 373 cash game players peaked on June 2 at WSOP.com, which is impressive for a couple of reasons. Obviously, with nearly 4 times the average cash game player traffic, that is a significant achievement. Also, around the world over that same period of time, world cash game traffic dropped by approximately 4.4%. And with overall Nevada Internet poker declining by 14.5% ($792,000 revenue generated in April), the WSOP surge is even more impressive. Still however, Nevada cyber poker traffic at legitimately established offshore providers like Bovada is still King in Vegas, and state-wide.

WSOP has created a special Grind Room in the Rio All-Suite resort and hotel in Las Vegas. This is to ensure that there are ample servers in place to handle all of the Internet poker traffic that will accompany the physical WSOP this year. Tournament organizers are also running express Internet poker cash games and tournaments timed to allow access between the schedule breaks during the World Series of Poker. During the physical tournament at the Rio, the WSOP website is advertised aggressively. And online at the company’s cyber poker portal, the land-based tournament is marketed as well. The online/off-line integration and advertising focus seems to be paying off.

The Nevada Gaming Commission has licensed several companies for online poker in the Silver State. Currently, just WSOP, UP and Real Gaming have launched virtual operations for real money poker wagering. Unlike Delaware and New Jersey, Nevada has decided to legalize online poker only, as opposed to casino gambling as well. It is no wonder that the highly regarded WSOP series of tournaments has dramatically increased online poker traffic and revenue for Las Vegas and Nevada. More than 80,000 players from 100 countries are expected to battle for the 65 bracelets offered during this year’s tournament series.

Currently, although Ultimate Poker is also running at least one WSOP Main Event qualifying satellite each week, the boost in WSOP site traffic has not made its way to the UP site. But that company’s traffic has not decreased either. UP has maintained an average of around 50 cash game players over any 24 hour period, with Real Gaming showing insignificant levels. The WSOP site usually runs between 6 and 8 major events every weekend (aside from the WSOP tourneys), with at least one 2014 World Series of Poker Main Event entry worth $10,000 awarded. UP generally offers 5 major tournaments each weekend, averaging around 200 entries and $30,000 in prize money delivered.