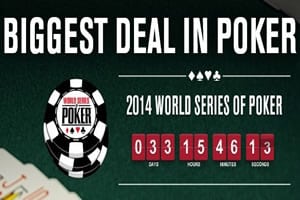 Luckisreal, but skill was probably more to credit, as that talented Las Vegas online poker player continued to add to his Nevada Internet poker win total. And while they say the third time is the charm, the first ever cash of the year for DiaperChanger earned that oddly named virtual poker player a seat at the Main Event. This week’s Nevada weekend tournament review showed WSOP.com running seven major Vegas poker tourneys for Silver State card players, and UP chiming in with four big tournaments. All told, there were 545 entries battling it out for more than $63,000 and one WSOP $10,000 Main Event seat.

WSOP had 382 hopefuls chasing 50 prizes worth a cash total of $45,200, including the World Series of Poker Main Event qualifier. That particular tournament required a lofty $215 buy-in, and saw a rather strong field bow down to DiaperChanger. The 45th WSOP will be held from May 27 to July 14 this year at the Rio All-Suit Hotel and Casino in Las Vegas. The WSOP site also held a Weekend Warm-Up $5,000 Guarantee and a Re-Entry R&A $3,000 Guarantee on Saturday, April 19. DiaperChanger’s victory gave him/her the biggest individual prize of Nevada’s online poker weekend.

Sticking with WSOP tournament action over the weekend, we saw SilverMoon taking down two more victories to add to an impressive Nevada online poker win total. That player bested the field for both the $15,000 Sunday Guarantee for $4,902, as well as the $3,000 Sunday Re-Entry event for $1,050. That makes more than $7,000 in five cashes over the last four months. However, an argument can be made that luckisreal is the hottest cyber card player in all of Nevada, after winning the $2,500 Nightly at the WSOP on Sunday and taking second place in the Sunday $3,000 R&A.

Luckisreal has now cashed a ridiculous 22 times at the WSOP site, besting that with 34 paydays at Ultimate Poker. That combines for more than $33,000 overall. And quietly under the radar, brokefinger has managed a more than respectable 17 cashes for over $8,000. That includes a dozen first place wins in lower guarantee events, which evidently is that player’s specialty. Most recently brokefinger (also playing in Nevada as asianhustler) crippled the field in this past Friday’s $3,000 Daily R&A at WSOP. Over at the UP action was much lighter, as the WSOP site is definitely benefiting from the upcoming World Series of Poker brick-and-mortar tournament card.

163 Nevada card players shared 20 prizes at UP, totaling more than $18,000. INtheMOMENT took home the Sunday $10,000 tourney for a $2,900 payday. It was that player’s third cash since early February. The Ultimate Poker $2,500 Nightly R/A held Saturday, April 19 paid four places with 23 entrants, showing allprowi with a $1,125 victory (also playing Nevada online poker under the name Iamtheflower). Feeltheflow earned $1,706.25 for his first-place finish during the $3,000 Sunday R&A at UP, and the ever-present butters earned $2,000 for a second-place finish to INtheMOMENT on Sunday to add to his impressive Nevada online poker resume.