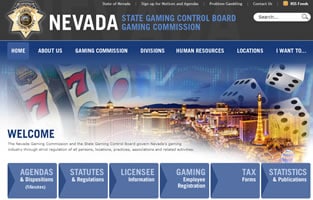 By running the new Internet poker experience through physical Las Vegas casinos, Nevada has ensured that the world’s most popular brick-and-mortar gambling destinations will not lose out to Silver State residents that decide to stay home and play poker online rather than hit The Strip. Showing an improbable increase of traffic to its to poker websites during last year’s holiday shopping season which usually shows Internet traffic down, there is good news opening up 2014 regarding Internet gambling in Las Vegas, and in Nevada as a whole.

During the last 30 days of 2013 the WSOP and UP websites offering Internet poker in Las Vegas showed an uptick of traffic, registering more than a 20% increase. While New Jersey still leads Delaware and Nevada in overall traffic and poker support, that state also does boast three times the population of Nevada, and more than double the population combination of both of those states. Both the World Series of Poker and Ultimate Poker companies have an Internet presence in New Jersey as well, where that state has decided to offer both virtual poker and a full range of Cyber casino games.

This is great news for Nevada, who has still yet to release an earnings report for its Q4 2013 Internet gaming revenue. Data gathered by Adam Krejcik of Eilers Research shows that if no more poker websites were opened by Nevada, the state could expect approximately $18 million in total annual revenue during its first year of operations. Obviously, multiple companies have been approved for delivering Cyber poker to Silver State residents and visitors, and those firms, anchored by popular and world-renowned physical casino properties, will begin to add to their Internet poker offerings this year.

Even so, for a state with roughly 3 million residents, $18 million a year in total annual revenue which was not available until recently is certainly a welcome addition to government coffers. Again, these are just estimates, and we will have to wait until the Nevada Gaming Control Board releases hard revenue figures. And to bolster revenue, Governor Sandoval has already wisely been in talks with multiple European countries and New Jersey’s Governor Chris Christie about forming possible interstate and international compacts which would raise the player pool figures of any parties involved.

The Nevada Gaming Control Board has announced that they will only release revenue figures when three sites are fully operational. That should happen before the end of the first quarter of this year, or early in the second quarter. Without delivering Internet casino gambling possibilities, and just offering poker, Nevada has probably put a potential cap on Internet gaming earning possibilities. However, with the world-famous World Series of Poker hitting the physical streets in Las Vegas from May through July, thousands of players will descend on the land-based and virtual poker offerings that Sin City and the Silver State have to offer. Expect to see a spike in online poker traffic during that period, a time frame which may also see California and/or Pennsylvania offering internet gambling products.