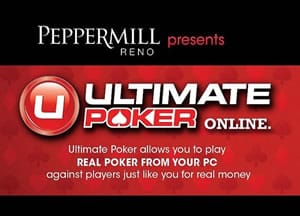 Vegas online poker just received another Nevada-based option for Silver State residents. The Peppermill Resorts conglomerate received an interactive gaming license from the state of Nevada when it applied for such last year. And now that Peppermill has come to terms with Las Vegas-based Internet gambling firm Ultimate Poker to provide online poker options through its line of land-based casinos, WSOP has one more UP competitor. Peppermill Resorts is a privately owned group of casinos, operating six Northern Nevada properties in that state.

Peppermill announced in a planned news release that Nevada residents and visitors will now be able to make online poker deposits at both the Peppermill Resort Spa Casino in Reno and the Western Village Inn & Casino in Sparks. The company also operates three hotel casinos located on Interstate 80 in Wendover, close to the Utah border. Those brick-and-mortar casinos will also accept online deposits for Nevada poker play. Ultimate Poker CEO Tobin Prior stated that the Peppermill partnership will take advantage of that company’s extensive player pool database, expanding UP Internet offerings to the Northern Nevada marketplace.

Peppermill online poker players should head to PeppermillReno.com/Ultimate to register for a free account. Then they simply need to travel to any of the company’s physical casinos for the purpose of making a secured deposit, which is required before playing online. Recently, due in large part to the World Series of Poker land-based poker tournament which is the largest in the world held every year, UP has seen the WSOP online poker rooms experience a significant uptick in player volume. However, a positive takeaway shows that Ultimate Poker traffic has not been affected negatively by the annual WSOP tournament schedule.

The Peppermill Resort Spa Casino is a direct Reno-based competitor in northern Nevada with the Atlantis Casino Resort Spa, who has previously stated it will not be offering online poker. Atlantis CEO John Farahi announced that it was his company’s position that online gambling is virtually uncontrollable, unlike the action located inside the four walls of a land-based casino. Citing “social responsibility” as part of the decision for the Atlantis for not offering online poker, it will be interesting to see if that opinion changes in the future, now that a major competitor will soon begin delivering that product.