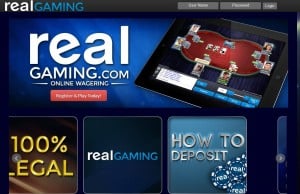 We have all heard that two is company, and three’s a crowd. Accordingly, as Las Vegas online poker sees the third state certified Nevada Internet poker portal throw wide its virtual doors, can the new Real Gaming offering make a name for itself in an already competitive marketplace? The Ultimate Poker and WSOP poker sites generally appear to be pretty evenly matched regarding cash game and tournament poker traffic in Nevada, and the South Point-backed Real Gaming Internet poker room will have to either steal market share from those two established card rooms, or effectively deliver new Las Vegas and Nevada-based card players to its website.

The official launch occurred on February 18, with real money wagering immediately available. The WSOP and UP poker sites, like the Internet casinos in New Jersey when they opened, launched in a limited capacity, but Real Gaming is immediately offering cash games, multitable tournaments and sit-n-go real money card games right out of the gate. While New Jersey has already released Internet casino revenue for the shortened two month quarter that ended 2013, Nevada has yet to reveal the financial take from its online poker industry. Gaming officials have repeatedly stated that after a third Internet poker room is launched, revenue from Internet poker will be reported, so the arrival of Real Gaming will at least deliver a glimpse at the financial side of the business in the Silver State.

Looking backward, we can compare the upcoming performance of this third Nevada poker experience to the entry of WSOP, which arrived after UP was the only established Internet poker option in Nevada. PokerFusePro reported a significant but temporary surge in poker traffic when WSOP arrived on the scene in September of 2013. However, overall cash game and tournament traffic numbers have settled in Nevada since the WSOP site launched, and are just about where traffic was reported when UP was the only game in town. It will be interesting to see if Real Gaming will employ a marketing blitz or significant player rewards and incentives to substantially boost traffic and begin building their own customer base.

The South Point Casino where Real Gaming is headquartered is a respected and decently sized facility which has already created an extensive player database that they can access. But their marketing capabilities will probably pale in comparison to the aggressive push already initiated by the Station family of casinos in Nevada, promoting their Ultimate Poker site. The Nevada Gaming Control Board has confirmed that February earnings revenue numbers will be reported in March, now that Real Gaming is up and operating. And if three proves to be a crowd in the early Internet poker industry in Nevada, things could get even more congested quickly.

Itai Frieberger of 888 Holdings said all the way back in October that the company was on schedule to launch its All-American Poker Network in Nevada in early 2014. The identifiable Treasure Island and Wynn brands are to be included on the network skin, although the eventual arrival of 888 on the Nevada Internet poker scene may have been slowed down by Steve Wynn’s recent reticence towards online gambling. And we can’t forget Bwin.party, which was also awarded an Internet gaming license for delivering online poker in Nevada, along with about a dozen other operators. That company already holds the lead in New Jersey casino market share with partner Borgata, garnering nearly 46% of overall player traffic.  Learn more about online poker options in our Las Vegas online poker reviews.