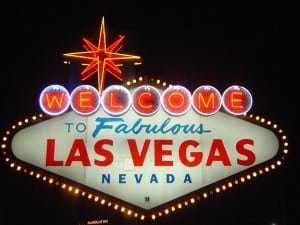 After the 2011 gambling-friendly decision by the US Justice Department to allow individual states to decide their own Internet casino and poker destinies, Nevada quickly said, “We are all in!” As was to be expected, it took some time to build an infrastructure, have online gaming facilities tested and approved, and actually deliver the historical first-hand. That occurred earlier this year, and now there are two state-sponsored websites run by the World Series of Poker brand and Ultimate Poker. Are we about to see a third Vegas online poker site enter the burgeoning Internet gambling industry in the Silver State? Maybe, but maybe not.

Before New Jersey launched its full-fledged online casino operation on November 26 to residents of and visitors to the Garden State, Nevada delivered the best online poker numbers principally because it was the only state in the US that was delivering legal, state-regulated Internet poker. The WSOP and UP sites now currently claim about the same amount of traffic on an average monthly basis, but their numbers pale in comparison to New Jersey, which is in the next couple of days going to register its 100,000th legal NJ i-Gaming participant.

Many of those “New Joisey” Internet gamblers will stick to the virtual casinos and may never see an online poker table, but judging apples against apples, New Jersey recently passed Nevada in daily cash game poker traffic, and has slowly been extending its lead. Does this spell doom and gloom for Nevada Internet poker? Not necessarily, since Nevada, Delaware and New Jersey poker players can only enjoy the Internet gambling options offered by those three states when they are located inside state boundaries. And since Nevada residents and visitors are not probably going to be traveling to New Jersey just to play Internet poker there, Nevada will not suffer because of New Jersey’s success.

Actually, Nevada (just under 3 million residents) may sign a player pool-sharing compact with the more populous New Jersey (almost 9 million residents), which would help both states fill more virtual poker tables. And there are currently three potential websites very close to being operational which could qualify as the third Internet poker site in Nevada. Z4 Poker is owned and operated by David Colvin, who also owns the brick-and-mortar Siena Hotel Spa, Z4’s strategic partner in delivering Internet gaming in Nevada. Having a brick-and-mortar partner in the Reno, Nevada marketplace that is probably untapped by either of the current WSOP or UP sites could spell success right out of the gate, if Z4 becomes the third site to get the state’s okay for offering Internet poker.

The All American Poker Network (888 will be doing business under this name) could benefit by 888’s involvement in New Jersey and Delaware, and they have already partnered up with Treasure Island, Wynn and Golden Gaming for a local Nevada presence. South Point Poker will be flying under the Real Gaming flag, and is already familiar with Nevada sports gamblers thanks to the recent sports betting application they launched in partnership with local physical Las Vegas casinos. All three of those web sites are ready to make history as the third in Las Vegas to deliver legalized Internet poker when the state gaming officials feel there is a need for another virtual Vegas offering, and we will keep you updated right here as to all the breaking news concerning Las Vegas online poker.