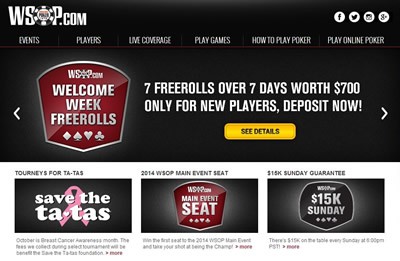 Since it arrived in April of this year, legal online poker for Nevada residents and travelers up until recently had been a monopoly. Station Casinos delivered the “only game in town” in the Silver State, having made online gambling history in the United States when the company opened the virtual doors to its Ultimate Poker website. Knowing that it would not always be the only online Nevada poker offering in a state that is home to the globally recognized Las Vegas gambling mecca, Station Casinos has been aggressively pressing its advantage since day one. The company owns and operates 18 different Nevada and Las Vegas casinos, and has marketed promotions and advertising driving awareness about the newly delivered option to play poker online in Nevada as opposed to having to travel to a physical Las Vegas land based poker room location.

Well, as they say in the marriage business, “The honeymoon is over.” Competition has now arrived, and unfortunately for Station Casinos, it has showed up with venerable brand name recognition and a massive ad blitz both online and through TV advertising. The battle for stay-at-home players enjoying their favorite online poker games from their smartphones, PCs and laptops has begun, and a little earlier than expected. Caesars Interactive Entertainment is the branch of that recognizable casino property management company which delivers its virtual version of online poker to Nevada residents and travelers. They recently began advertising for their World Series of Poker site, WSOP.com, which began operation through a soft launch ahead of schedule on September 19.

The campaign is handled by independent ad firm Zambezi of Venice, California, a state which is pushing hard for legal online poker to debut in early 2014. Advertising has been hitting the TV, Internet and radio airwaves, has also been seen in traditional print media, and the WSOP.com message focuses on several benefits that online poker delivers which are not available when you belly up to a physical table at a Vegas casino. Pushing a recurring “whenever, wherever” mindset, the commercials are cheeky and fun, if not a bit crude on at least one occurrence. A radio ad currently running in Las Vegas and other cities in Nevada has a voice actor expressing his happiness that he can now “catch a flush while I flush.”

And while you can see pretty much anything and everything in Las Vegas, it is probably best if you do not attend physical casinos dressed only in your underwear. However, the WSOP ad campaign currently running on radio airwaves also has a spot which drives home the idea of winning money while dressed in your underwear. Hopefully they are referring to the people located at home, and the enjoyable advertising blitz does not focus on only bathroom humor and people who are too lazy to dress while they play poker. A TV ad which has been running online shows a poorly skilled poker player who consistently gives away his hand with his facial expressions, or “tells” as they are referred to in poker parlance. He expresses considerable relief that now, thanks to legal online poker in Nevada, he can play comfortably at home because, “Online, I don’t need a poker face.”

If you have ever personally been to Las Vegas or another Nevada casino, you may have seen a winning player who was a little too overzealous after winning a particular poker hand. Unspoken poker etiquette has always frowned on players celebrating too excessively after a winning hand, but the WSOP ad blitz reminds you there are no such limitations when you play from home. Chris Raih, the founder and managing partner of Zambezi, said that his company is trying to create new behaviors, since legal online poker in Las Vegas and Nevada has not been available before. The ads may just be working. Combined cash game traffic from Ultimate Poker and WSOP.com reached a new seven day online poker high of 232 players the first week that the WSOP site was open during its soft launch, a statewide record since legal online poker was delivered in Nevada this past April.