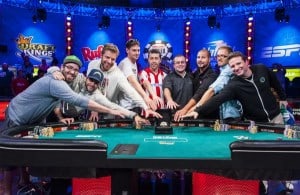 The World Series of Poker is the most anticipated and popular live poker tournament in Las Vegas and in the world. Every year tens of thousands of poker hopefuls from across the globe descend upon Sin City in the Nevada desert. Their dream? To pull a Chris Moneymaker 2003 achievement and move from relative anonymity to poker stardom. Of course, the $10 million guaranteed first prize delivered to the WSOP Texas Hold ‘Em Main Event Champion wouldn’t be too bad either. The 2014 WSOP tournament schedule included 65 events, but the Main Event is the culmination of this tournament series, and easily its biggest draw. Main Event play this year began with 6,683 grinders, and is finally down to the November Nine that will play at the final table in a few months.

The final 9 Main Event survivors will meet up in November for the appropriately named November Nine final table. All players are guaranteed at least $730,725, the amount awarded to 9th place. In previous tournaments, many or all of the final table contestants made agreements to split their proceedings before final table play commences. Jorryt van Hoof sits atop the November Nine chip lead with 38,375,000, and Bruno Napolitano is in ninth place with 12,125,000 chips. Blinds will open at 200,000 and 400,000 with a $50,000 ante when WSOP final table play commences. A reserved professional  Las Vegas online poker player and gifted golfer has made it to the final Main Event table, and hopes that his years of playing Internet poker for a living will deliver him the Main Event title, bracelet and $10 million check.

Dan Sindelar makes a living playing poker online, and also place a little physical poker in Nevada. But that wasn’t always the case. The 30-year-old, the third oldest of the November Nine, was a typical college kid when he dropped out of school in his junior year “to pursue poker full-time.” Sindelar is a natural born poker player because he remains calm at all times, even when interviewed about his life changing achievement. “I just hope to play my game and not get out of my element,” Sindelar said. As one of the oldest competitors, Sindelar has been playing online poker for 10 years. When he dropped out of college, he decided to move to Las Vegas to improve his “sit down” poker play.

He said he was doing financially well playing poker online, making a full-time living when he moved to Las Vegas in 2008. He immediately found himself playing well in big-stack NL Hold ‘Em games with $5-$10 and $10-$20 blinds at the Bellagio, as well as other poker rooms around the city. He also decided to try his hands at the WSOP in 2008, earning $335,962 in tournaments before the Main Event. With the $10,000 Main Event entry fee looking small in comparison to his WSOP winnings that year, he entered the Texas Hold ‘Em Main Event which is the singular most popular poker tournament in the world. However, his early fortunes were not found at the Main Event in 2008, or in the past 5 annual WSOP tournaments where he finished just short of the cash each year. This year, Sindelar cashed in just 3 out of 18 WSOP events before making it to the Main Event final table.

Online poker players like Chris Moneymaker and Dan Sindelar benefit by being able to play literally millions of hands in just a couple of years. The legendary poker playing Hall of Famer Doyle Brunson said that Internet poker players have an advantage that he and his ole’ time brick-and-mortar players did not enjoy; the ability to quickly become experienced thanks to the fast and always available features of online poker. Most of the players at this year’s November Nine table play consistently online, if not as frequently as Sindelar. Can’t make it to Vegas this November? Some Internet gambling websites allow you to bet on who you think is going to win that final table showdown. Currently, chip leader Jorryt van Hoof can be found as a +250 money line favorite. Although Martin Jacobson sits in 8th place with just 14,900,000 chips, he is only +750 to win the Main Event. This is because Jacobson is the most accomplished live tournament poker player at the final table. Dan Sindelar currently sits at +700 on the money line, right in the middle of the field as far as chips are concerned, a perfect spot for a quiet and patient, experienced player.