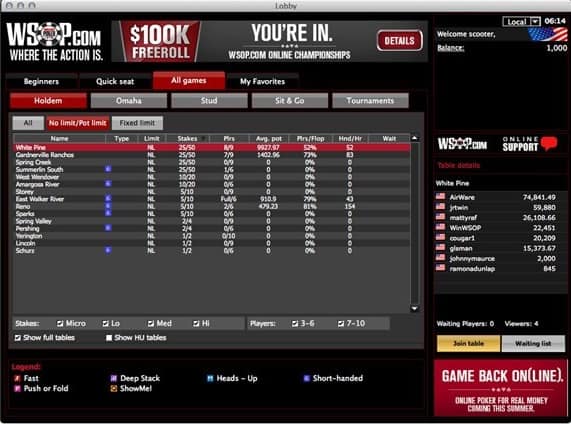 Ultimate Poker launched the first real money online poker site in the United States in Las Vegas back in April, and they now have competition. The globally recognized and respected World Series of Poker brand opened the virtual doors of WSOP.com on September 19, two days earlier than their pre-registration had planned. Players and site managers said that the launch was relatively smooth, with next to no player complaints. World Series of Poker officials before the launch announced they were integrating their site with several features and abilities that they believe were improvements over the rival Ultimate Poker online poker site, and promise to offer true Vegas style online poker gaming at their site.

The site had been officially launched with free play games, but actual cash games were added this past week. At the request of potential players, WSOP added several new fixed limit tables to Omaha High/Low and Stud High/Low. The new limit game offerings are $0.25/$0.50, $0.50/$1.00, $1.00/$2.00 and $2.00/$4.00. Also, in addition to the games which were debuted when free play was offered, WSOP.com now offers Las Vegas residents and travelers additional multi-table tournament games. WSOP satellites are showing up on the site, and have been added to the Sit ‘n Go and multi-table tournament lobby.

Also, many players have made requests for Pot Limit Omaha High/Low, and company officials said that they will be rolling out sometime in the future. Multiple Texas Hold ‘Em game types at different financial levels are obviously offered, as this is the popular game played in the world’s largest poker tournament, the World Series of Poker Main Event. The IP address and GPS cell phone location technology of a particular player guarantees that they are located in Nevada at the time of play, one of the stipulations of the new Nevada online poker legislation which makes playing Internet poker legal in the Silver State.

As can be expected, there were a few hitches when the site first launched, including the problematic occurrence of several Cox high speed internet subscribers in Las Vegas showing as being located in Phoenix, Arizona. After multiple customer complaints received before the launch of the site, the problem was fixed. Players can make deposits to their online WSOP.com poker account through electronic check transfer, or by using their Visa or MasterCard credit, debit or prepaid card. The minimum first deposit at launch was $10, and the maximum allowed to be deposited at any one time is $500.

After successful verification of a player’s identity and location, and the initial deposit, deposits via electronic checks will have a $5,000 maximum per transaction, a $30,000 daily max, and a cap of $100,000 a month. When a player enjoying online poker at the new WSOP website wants to withdraw money, paper checks and electronic checks are available withdrawal options. A $20 minimum is required for withdrawals, with no disclosed maximum. Also, unlike their competitor at Ultimate Poker, players cannot deposit or withdraw cash at any Vegas casino cage. And players located outside of Nevada can make deposits online, but they must be located inside Nevada state boundaries to actually play online poker at the new WSOP.com website